[WIP] Corruption Cards - Vanilla Doom, but with twists you choose!

[WIP] Corruption Cards - Vanilla Doom, but with twists you choose! 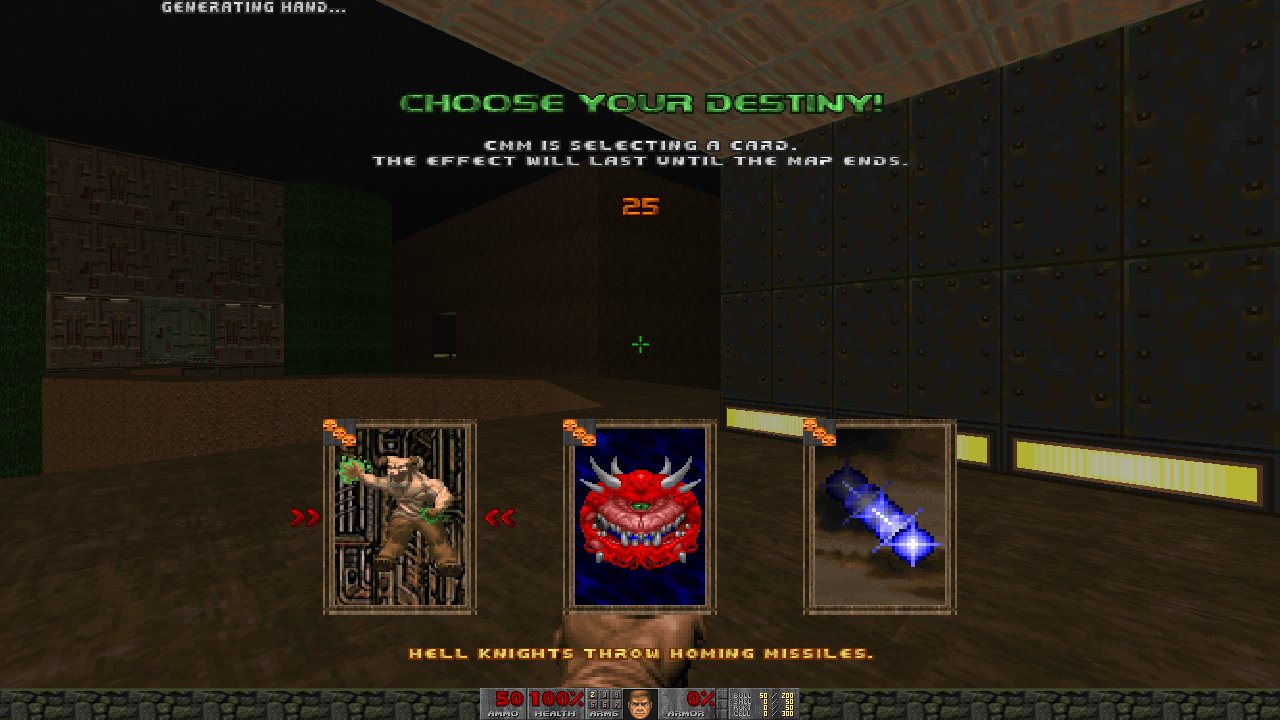 This is a gameplay modifier which starts each map with a choice of cards. These cards effect the gameplay in some way. The effects range from altering monster attacks, adding new rules, changing items etc. They are only slight tweaks, some more dangerous than others (see the screenshots for more effects). Every 3 maps, you are offered a permanent card. This card will be locked in for the rest of the game, meaning you will have to live with your choice until the game is over! Obviously this is intended for single runs or survival (zandronum) to see how long you can go on with all the stacked effects, but as with all Doom mods you're welcome to save and load.

Cards that effect particular monsters will only show up if the monsters appear in that map, meaning you won't get a card that makes Cacodemons respawn if you're on MAP01 of Doom 2. Also the cards have tiers based on how powerful (or evil) their effect is. They rank from tier 1 to 5, and you start seeing higher tier cards the more maps you complete. This is to try and balance the game out if you start on a map other than MAP01. You cannot get duplicate cards, but can get duplicate effects. For example you could get a "Imps throw Rockets" and "Imps throw Mancubus Fireballs" running at the same time, which would give some Imps Rocket projectiles and some Imps Mancubus fireballs at random.

If in multiplayer, players take it in turns to choose a card. Boot it up with survival, bring some friends, see how many maps you can beat before you fall to the madness!

GZDoom, ZDoom or Zandronum is required.

My main goal for this mod was Zandronum compatibility, as the option for multiplayer is too good to pass up for me. Sadly that means this won't be compatible with many mods as it has to replace and tweak every single monster, item and projectile in Doom 2. As you can expect, the cards are predefined and only involve Doom 2 actors. I welcome anyone to make a fancy version of this with mod support if they want, but that is out of the scope of what I wanted to make.

So what works? Well it should run with any mapsets that don't edit Doom 2's stock monsters, projectiles and items. Heavily scripted maps may conflict with some of the card effects too. It should also work with Doom 1, as some cards will be filtered out if the script detects you're playing without Doom 2 content.

I recommend vanilla gameplay settings and DMFLAGS as this was intended for use with vanilla maps, but mostly you can use whatever. I did add some custom CVARs to tweak the experience if desired though:

Changes
* Fixed a bug where the game would stop working properly if spectators existed (Zandronum)
* Added some primitive measures to stop offering cards if the game can't find any to offer you.
Top
Post Reply
1 post • Page 1 of 1