Hello everyone, I am glad to introduce one of my lastest small project called "Endless Battle", the goal of that mod is quite simple. As the title say, that mod will make the gameplay on a map just endless, which means that monsters, weapons, pickups and more will keep spawning on the map until the player exit it. But what is the difference compared to the vanilla item/monster respawner in doom? Well the difference is the fact that here you have the possibility to configure almost every single aspect of the mod, which offers you tons of options to create the gameplay of your dreams!

To begin with the mod is for now compatible with both Zandronum and GZdoom, but for the future I don't know if I will keep the compatibility with Zandronum as it is too much outdated and many bugs have the possibility to appear online but never offline. To make that project I have been inspired by Laggy Blazko author of "Demon Counter Strike", but somehow I felt that I didn't have enought control on what monster/item is allowed to spawn and at what specific moment. So I decided to make my own project on the same kind of goal. Anyway let's begin the explanation.

So the project is devided in 3 parts, monster spawners, items spawners and props spawners. 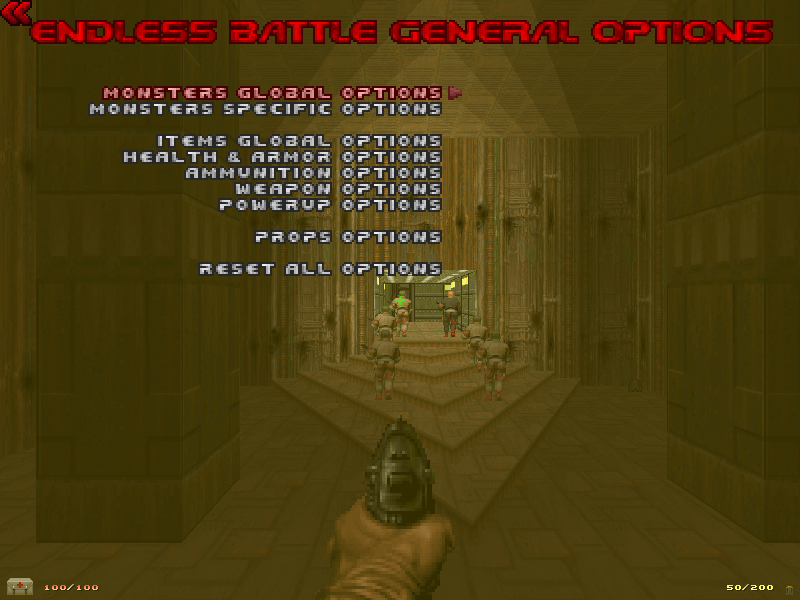 As you can see you have here access to different settings allowing you modify how the world will adapt to your situation.
Let's begin with monsters. 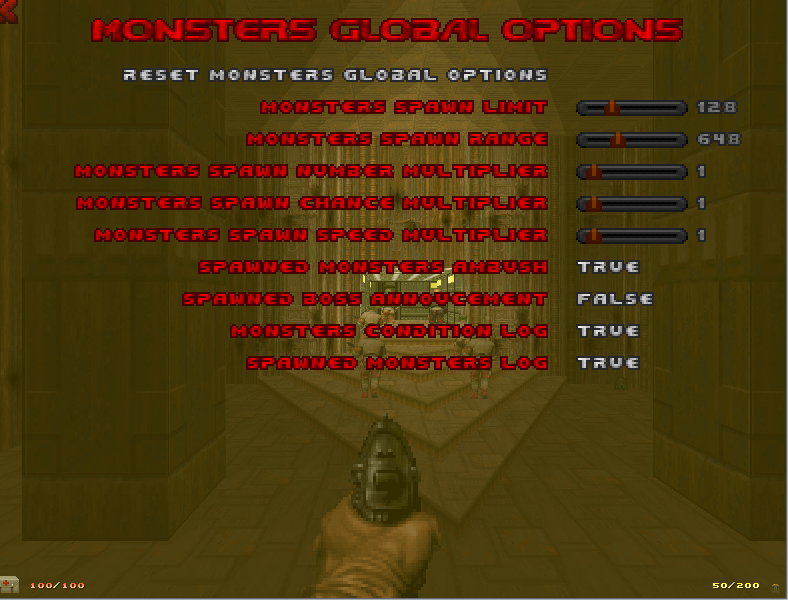 Here are the following options So as you can see the options are plentiful but this is not all. 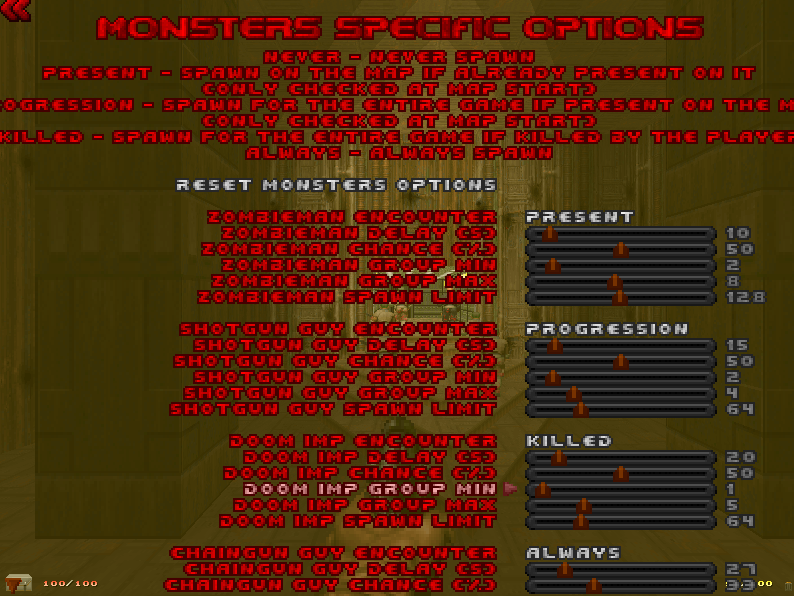 Following the monsters global options you can now deal with the monsters specific options menu. Here you can edit every single monsters of Doom2 properly. The first option which is the encounter type define in which conditions the monster is allowed to spawn. There are a total of 5 different options for them.
So with these 2 menus you can for example have 100 shotgunners spawn in the map every 2 minutes for no reason. Or have at least one Cyberdemon always present somewhere looking for you each time you kill the previous one, the ideas are infinite.

Now regarding the items options, the settings are quite the same. The only difference is the fact that the "Killed" criteria is replaced by the "Picked Up" criteria which activate the spawn of the item when the player has picked it up at least once in the his gameplay.

And for the props menu, well you have probably found out, and yes it concerns only barrels for now. So if you like barrels and want tons of them in your map then you are welcome haha.

So this is a little small project that I have been working on for a little week. It's was quite hard to find a way to keep compatibility for both Zandronum & GZdoom and also finding a way for monsters to spawn on the map without breaking anything. The only solution that I found was to replace the DoomNum of the actors of Doom2 which means that each time you start the game, you will get a warning message about it but do not worry as it should work properly.

I have also tested mod compatiblity with randomizer such as Complex Doom, Brutal Doom or Pandemonia and it should work fine without problem so have fun.

Regards and any comment is welcome, sorry for my english haha.

PS: I know that the forum is quite dead, I'm posting it anyway as I will post it also on Zdoom
Top

Have two bugs i see, monsters try spawn on teleport and loop make it minor lag, second is have problem of lag
Top
Post Reply
3 posts • Page 1 of 1